I would have gotten to this sooner, but the Google Doodle game is just too much fun.

It is the night before Halloween. My wife and I are both working on our own separate projects, she is drinking cider, Hocus Pocus is on in the background, and Winnie is being… Well, she’s being Winnie. Trick or treat is just around the corner! At my library, we will all be dressing up in costume (if they want to, I guess) and doling out candy. Jo and I dressed up as Gerald and Piggie from Mo Millems’ Elephant and Piggie series. Librarians like to have fun in their own nerdy way!

This month, I challenged myself to only read spooky books and I mostly succeeded (audiobooks excluded, although, I may need some time to decompress before I talk about Bryan Cranston’s read of The Things They Carried). Here are the book I read (or partially read):

The Merciless by Danielle Vega. What a great book to start off with! And look at that cover! Sofia moves to a new school after some mysterious happenings at her old one and befriends a group of very Christian girls. One night, they begin to “exorcise” a girl named Brooklyn after she is seen kissing the ringleader’s, Riley, boyfriend. However, things take a turn for the worse after her true intentions for Brooklyn are revealed and it becomes a fight for their lives. There were a few times I cringed so hard while reading this. There were some very graphic descriptions that made me a bit queasy. Overall, I highly recommend this book, especially if you need a scare. Also, it is a series!

(Hocus Pocus is over, now we are watching my least favorite Halloween movie, Halloweentown.)

Inferno by Dan Brown. Concluding my Langdon-A-Thon in October was the best decision. Not necessarily spooky, but it was definitely the most realistic book I read. Feel free to read my thoughts about it here.

Thinner by Richard Bachman (Stephen King). Okay, you can’t have a spooky book month without reading some King, but this was definitely the wrong choice. Billy Halleck runs over an old gypsy woman and kills her. He is acquitted, but an old man curses him, muttering one word while touching his face. “Thinner.” He begins losing weight at an alarming rate, thus begins a journey to lift the curse. Not a whole lot to say about this book. It’s just… Mediocre. There was no ominous feeling like what you expect from King, mainly because I really didn’t care for the character. For King completionists only. The movie comes on Netflix in November, so I am excited to make fun of that as well. 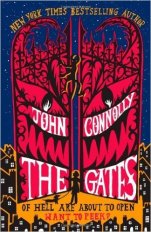 The Gates by John Connolly. This was far and away my favorite book I read this month with a hell of a cover. Young Samuel Johnson and his dog, Boswell, accidentally witness a group of adults summon demons from Hell. The demons possess their bodies and begin their plans to open the gates of Hell so The Great Malevolence can unleash Hell on Earth. With the help of his friends and a demon named Nurd, Scourge of Five Deities, Samuel launches a counter-attack to save the world he so loves. Connolly’s writing really reminds me a lot of Douglas Adams which is an amazing thing. Fast paced, hysterical dialogue, creative characters and much more make this an easy recommendation for fans of Adams and Monty Python. The start of a series (which I totally bought shortly before finishing this book).

Lightning by Dean Koontz. I gave Koontz a shot. I really did. Another horror writer that everyone says I should read and I read this hot pile of garbage. This went into the DNF pile about 3/4 of the way through. A quick overview of the plot: It follows the life of a woman who grew up in an orphanage and is protected from harm by a mysterious guardian. It turns out the guardian is actually a time traveller and he is protecting her for reasons unknown. Cool idea, right? It was great up until the big twist. SPOILER ALERT (for an almost 30 year old book): HE’S A TIME TRAVELLER FROM 1944. FROM GERMANY. NAZI GERMANY. I pretty much quoted exactly how it is revealed in the book. I thought, “Hmm, not the direction I would have gone, but okay let’s see where this goes.” I lasted about 30 pages and put it back. I couldn’t get past that reveal and just how stupid of a plot device it is. Anyway, very hard for me to recommend to anyone. Bad book. Decent writing, bad book.

That’s what I read this month for Halloween.For tomorrow, I’m gonna bust out some Fear Street and Goosebumps and get my spook on! I want to hear all about your adventures in spooky reading. Leave a comment below and tell me what you are reading.

Featured image via. All book images from Amazon.