“If you don’t enjoy magic, there’s no love in your heart.”

I am a huge fan of stage magic. Every year, when America’s Got Talent starts, I always hope that a magician will be the big winner. The sheer talent it takes to pull of sleight of hand tricks and misdirection is mind boggling. I’ve seen The Prestige, I know what really happens to that bird, but, man, what a performance! Watching a performance always makes me feel like a kid again, even though I know it is just a trick. 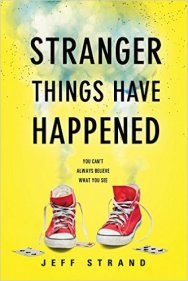 Jeff Strand’s newest book, Stranger Things Have Happened, is an incredibly fun, lighthearted middle grade book. Marcus Millian III is an aspiring magician. His biggest inspiration is his grandfather, Zachary the Stupendous (it’s not me, I promise). While at a local fundraiser, Zachary has a run-in with an old nemesis which ends in a bet that involves Marcus and a never- before-seen, incredible, amazing trick… Which may or may not exist. When Zachary dies the next night, Marcus is at a loss in more ways than one.

While grieving, he has a flash of genius. He will make a shark disappear (well, not actually disappear, but will make is seem like it is disappearing with some tricky mirrors, but you probably knew that already)! While trying to achieve his goal, Marcus’ life is threatened by Seamus the Sinister, another magician from Zachary’s past; he has his first (incredibly awkward) kiss from his best friend, Kimberly; and befriends a kid who fights crime in the night as “The Witch”. Needless to say, his life is incredibly complicated and will only get worse as time passes.

I really enjoyed this book. The writing is so well done and funny. Strand has a way of making cringe-inducing catastrophes hysterical. His characters are fun, well thought out, and interesting. He will sometimes go on these page-long tangents that do not really progress the plot, but usually end up being an enjoyable, comical sidetrack. However, sometimes these can go on for a bit too long and can become a little obnoxious.

Stranger Things Have Happened by Jeff Strand will be available April 1st, 2017.

Featured image via, book cover via