I read quite a bit this past year. Considering I am now a father, I’m pretty proud of the amount I finished. However, I’ve been slacking on this blog. This year, I will be posting weekly. What will the articles be about? Who knows! I’ll figure it out along the way.

of Us Just Live Here by Patrick Ness – You know how most YA novels focus on a “chosen one”? Someone who is tasked with saving the world and ends up saving it at great personal cost? Well, this is about the other people, the ones who have to deal with them blowing up towns and killing zombies. This was just a fun book. Ness has a pulse on the YA community and showed how silly it can be sometimes. Mixed in with the satire are some incredibly poignant moments about mental illness that really spoke volumes to me.

9. New Boy by Tracy Chevalier – This book. Whoa. This retelling of Shakespeare’s Othello was so good, it inspired me to read more of the Bard. A new boy, named Osei, moves into an all-white neighborhood in the 1970’s. Being the only black boy in school, he is seen as a beautiful new crush to some, but a threat to others. Excellent prose and a timely story make this a novel that will stick in your mind for a long time after. Sidebar: Totally thought the cover was a robo-hand. It’s not. 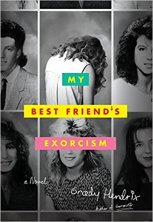 8. My Best Friend’s Exorcism by Grady Hendrix – I’m a huge Stranger Things fan. Not a big surprise, everyone is. This book is PERFECT for fans of the Netflix sci-fi show. Let me start by talking about the hardcover release. What you can’t see from the picture to the left is that it’s just like a yearbook. It’s got “local ads”, signatures, the works. The book itself is just bonkers. Abby and Gretchen are best friends, that is until a demon possesses Gretchen. Filled with big hair and big heart, this is perfect for those who are craving their next sci-fi/horror/1980’s nostalgia-fest.

7. Station Eleven by Emily St. John Mandel – This is one of two books I always keep on my nightstand. The other is later on this list. Mandel’s novel is beautiful in every sense of the word. It combines all of my favorite things: comics, Shakespeare, apocalypse novels. After an aggressive form of the flu wipes out most of the world, survivors band together to create a new life from the ashes. So many plots woven together seamlessly, no wonder it was up for the National Book Award.

6. Cry, the Beloved Country by Alan Paton – I went through a South African literature phase this year. This was the best book to come out of that. This was also the only book I stayed up until 3 AM finishing this year. It was so heart-achingly beautiful at points that I couldn’t put it down. Stephen Kumalo, a pastor, searches for his long estranged son during Apartheid. I grew up after Apartheid had officially ended, so it was heartbreaking to learn about that awful time.

5. Phasma by Deliah S. Dawson – STAR WARS! YEAHHH! This past year, I got into Star Wars in a major way. Full disclosure, I never really liked Star Wars all that much until I listened to Aftermath by Chuck Wendig while driving to C2E2. Captain Phasma is my favorite character from the sequel trilogy and, man, Dawson really knocked it out of the park with her origin story. Plus, it has a really great narrative structure that I don’t see very often in books.

4. The Martian Chronicles by Ray Bradbury – I read this late in the year and it really took my breath away. Bradbury’s collection of short stories about the colonization and de-colonization of Mars is truly a masterwork for the genre. Heartbreaking, powerful, wonderful. Short Story Shoutouts: “The Fire Balloons”; “Usher II”; “The Watchers” (My personal favorite); “There Will Come Soft Rains”

3. You Don’t Have to Say You Love Me by Sherman Alexie – My last three really all should be placed as my #1, but, alas, that’s not how top tens work. YDHtSYLM took me by surprise. I like Sherman Alexie, but I don’t LOVE his writing. This, however, is a deeply personal story of his relationship with his mother. Patchwork writing, like the quilts she would make, make this memoir truly unforgettable. Poetry and prose meld together to create beautiful literature. I cried so much over this book and it made me reflect a lot on what it means to be a parent.

2. Lincoln in the Bardo by George Saunders – I’m not original. This is on every top ten list of the year and it’s my favorite publication of 2017. I listened to this first (How could I not? David Sedaris, Nick Offerman, Megan Mullally, Keegan Michael Key just to name a few) and this is the only book I have both listened to and read. I re-read so many passages from this book, they became tattooed on my eyeballs. Truly a remarkable first novel from Saunders. The hardest part of this book was listening to Lincoln (Offerman) grieve over his son: “When he is to be left out here? Is a person to nod, dance, reason, walk, discuss? As before? A parade passes. He can’t rise and join. Am I to run after it, take my place, lift knees high, wave a flag, blow a horn? Was he dear or not? Then let me be happy no more.” It breaks my heart everytime. 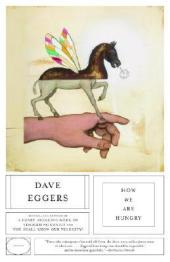 1. How We Are Hungry by Dave Eggers – Let me just say that Eggers has become my favorite writer. A Heartbreaking Work of Staggering Genius was my favorite book I read last year and the streak continues this year. This gets the number one spot because of a one and a half page short story. The story “On Wanting to Have Three Walls Up Before She Gets Home” entered my life at the perfect time. Joanna and I were days away from finding out that we were having a baby. We had been trying for a few months at that time and were hoping this was the month. It was a time for us of completely wonderful, marital bliss. The kind you hear about when someone talks about their soulmate. So in love. I read and re-read and re-re-read this story, this simple story about a man who wants to make something so ordinary extraordinary for his wife and child. His wife isn’t home because she is helping her mom out. He has his power tools. It’s lightly snowing. It’s life. Plain and simple. I have never read anything before or since that has so perfectly captured what it means to love someone so wholly and completely that you want to impress them every day with some tiny, inconsequential part of your life just to see them light up. Love, is what it’s about. Love and how important it is in life.

All images from Goodreads